THE STRUGGLE WAS REAL!

For those of us who lived in the duplexes of the RGH housing area in Seoul Korea, there was a thriving nighttime community of kids who roamed the streets after curfew, but for me, having a yard that was immaculately kept by the gardener was a struggle most people will never know!

Our gardener Mr. Lee kept our yard so immaculate that the one time I managed to sneak out the window to roam around with everybody, I couldn’t help but leave footprints in the flower bed below my window. Jumping out was easy, getting back in was the problem. I had to step in the flower bed in order to lift myself back up into the window. I was certain I had gotten away with it and was looking forward to doing it again as I slipped under the covers and went to sleep.

The next morning, Mr. Lee had a conversation with my father before he left for work and explained that he had found size 11 sneaker prints in HIS flower bed, which indicated that I had surreptitiously left the house in the night through the window!

Needless to say, when my father got home from work that evening I had to deal with him. He made it clear under no circumstances was I going to be climbing out of HIS window in the middle of the night, and if you remember my father, you know that was not an idle threat.

So for the rest of my time in Korea, I was unable to participate in the after-hours RGH nightlife. While I resented Mr Lee telling my father what I was up to at the time, in retrospect he probably helped keep me out of trouble, although that one night that I did get out was glorious!

What was hilarious that night was that our group passed several other groups of kids who were also roaming around too!

Years later I found out from my younger sister Rhonda that she routinely slipped out of the house and roamed around with her friends at night. If I remember correctly, she didn’t have a flower bed under one of her windows since she lived on the corner of the house.

At one point, my father was offered quarters on the main post at Yongson and asked if we wanted to move, but I was adamant about staying in RGH. Even though we were removed from all of the conveniences and facilities on Yongson, RGH allowed kids to do things that you could never get away with on main post because we didn’t have MPs and there was very little traffic other than our fathers coming and going to work. I’m so glad I got to experience Korea living on RGH. 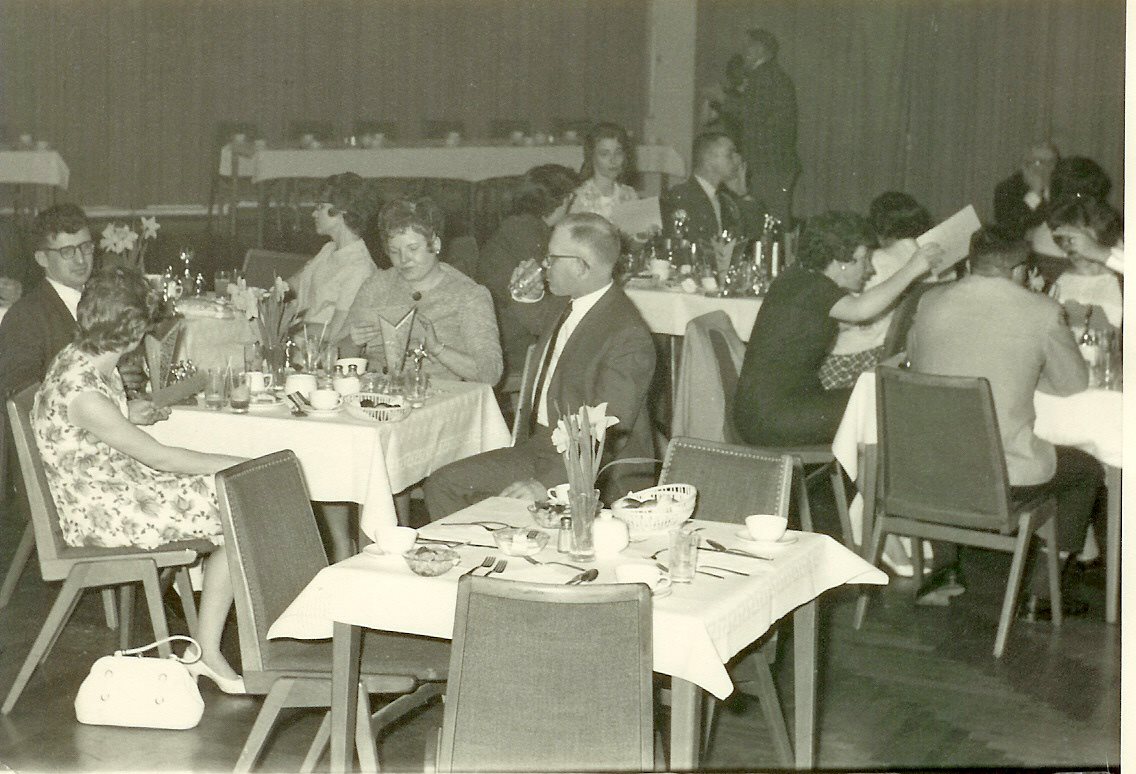 Our military apartments were never empty too long… My parents were always doing something in the evenings, and of course, my being there “must have” made it that much more fun. It certainly was interesting for me!

Some of their social life included evening get-togethers with other couples to play cards – Cribbage or Bridge or Rummy – and separately, Bingo, and Bowling.

Beers and mixed drinks were “de rigeur” for any such card gathering, and the games invariably got louder as the evening wore on.

Bingo was great because it carried a chance of winning cash. Mom went; Dad didn’t. Bingo was a great distraction, and Mom and I would drive to Bases where the jackpots were higher. I was too young to play, but I was in charge of of putting the plastic circles on the numbers, and sometime I got to use the Dauber-Marker for the paper-bingo-card games.

Mom joined the Ladies Club just about everywhere, also. I think it was more of a Kaffee-Klatsch opportunity than any real civic activity…

Bowling had no Rank. Bowling was a huge “thing” for Mom and Dad. They were always on one league or another, and they participated at every base we went to. I think they kept some of the trophies, but we sure had a lot to choose from! For the first many years, in our Housing Apartment, they were the main decorations in the living room.  I also remember that the Bowling Banquets themselves were sometimes the Base’s “Event of the Year”!