We are looking for school stories for a new anthology 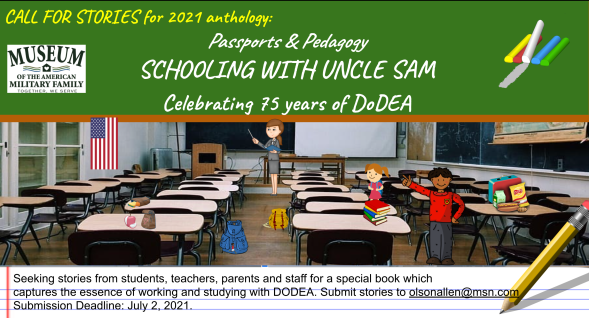 Schooling With Uncle Sam will focus on personal memories–what it was like to work or study in the school system, to live and work in a foreign country or military installation – the mundane, funny, or tragic events and interactions that made for a memorable experience. Stories should be about a certain time, event, or experience about school/work/life with DoDEA (or with its predecessor organizations such as DoDDS, USDESEA, DEG, etc.) Authors included in the anthology will receive a free copy of the book in lieu of payment.  All stories become the property of the Museum of the American Military Family Special Collections Library. Proceeds from the sale of the book will be used to help the Museum continue to bring exhibits and programming to the museum community free of charge.This is a chance to preserve a unique history and to be a part of it. It’s an opportunity to share a personal look at a world-wide school system serving America’s world-wide interests and assuring that your involvement with it will be recognized. You can submit up to three different pieces for the book.

PCOS orders!  Permanent Change of Station.  Dad had his new orders, and we were moving again!  Oh joy…  The military wife’s view of it was, “Three moves equals a fire.”  Not totally true, but not that far off either.

The moving van drove up to our house, forever after known as our ‘old’ house.  There were big boxes to put our loose stuff in, like clothing and linen closet contents, smaller ones for heavier but breakable items like china, and padding and wheeled dollies to remove our furniture. The men in the moving company’s uniforms set to work.  A few hours later, they were gone, and our house was vacant and strange looking.

Dad grinned at Mother and me, saying, “Let’s get this show on the road!”  Mother’s smile was a bit strained and tired as we left in our heavily laden car.  We were off! I knew we were going someplace new, but was too young to think ahead, to know I’d never see any of my friends again.

It took us two days to drive to our new assignment.  We finally arrived in Bellevue, Nebraska, where we found a motel for the night.  The next morning, someone came to pick Dad up, and take him to sign in on our new base.  Mother’s job was to find us someplace to live.  This was a bit of a problem.  She had two days to find us our new house before the movers were scheduled to come with our belongings. That, and Offutt, Headquarters Strategic Air Command, always had a large number of people moving into and out of the area.  Which meant there was a need for more homes than were available.

Mother had faced that situation before, during WWII.  Assigned to a training base in Louisiana, there had been hundreds of men and their new wives looking for a temporary place to live in a town which didn’t have that many local families.  There were no rented by the week hotel accommodations, apartments or houses available, just rented rooms, and not nearly enough of those.  She’d wailed her fears over the phone to her father back home.  His reply was classic.  “Doris, you don’t need several hundred places to rent, you and Paul only need one.  You can find one.”  And she had.

With that mindset, she, with me trailing along behind, began looking for a new home.  Knowing better than to drive around looking for For Sale signs in this situation, she began to make the rounds of the real estate offices.

We were standing in line behind a lady who had two toddlers bouncing around her.  When the lady’s turn came, she said she needed to sell her house quickly.  Without even asking how many bedrooms it had,  or how much it would cost, Mother called a reply of “I’ll take it!” before anyone else could beat her to the punch.  The two ladies, and us three kids, were herded to a desk off to one side, where the office’s supervisor managed the negotiations and paperwork.  And, just like that, we had a house to move into, even though we had no idea where it was or what it looked like since we didn’t know anything about our new hometown.

Dad bought an old car for a second car just to go to work in. He spray painted it to match the Buick Mother drove.  It used almost as much oil as it did gas.  He didn’t dare to change the oil for fear something ‘valuable’ might fall out, and the car would quit on him.  He just kept feeding it more oil.

We lived in that house for a year before moving into a second house Mother liked better, one with my school right outside our back yard’s gate, and a window that could hold an air conditioner for those summer days over 100°F!  Ah!  Luxury!

Four years after, Dad received another set of orders taking  him to his next assignment,  We were PCOS again!  That assignment would take us overseas!

WHAT MILITARY TV OR MOVIE CHARACTER REMINDS YOU OF YOUR FATHER OR MOTHER?

The question was asked by someone earlier on the page about what TV show or movie do you think portrays brat life well? Most people answered “none”, and I understand that. I haven’t seen any that strike me as being realistic and representative of my experience, but if you were to ask me what TV show or movie portrays my father in a way that is familiar, I would have to say the movie “A Soldier Story” made in 1984 starring Harold E. Rollins Jr.

The main character is an African-American JAG Captain named Davenport. The story takes place during World War II when Davenport is sent to a backwoods Louisiana Army post to investigate the murder of a Black senior NCO in an all-Black Chemical Corps unit. Not withstanding the fact that my father was a Chemical Corps officer, and that Rollins looks a lot like him, the movie is well made and the story is compelling. It has an all-star cast of Black actors that includes Adolf Cesar and Denzel Washington in one of his first roles.

Notably, my father joined the Army after integration, but he was still a rare commodity as a Black officer in the late 1950s. Throughout my life, there were never more than a handful of Black senior officers wherever we were stationed [if any], so my father understood that he carried the burden of being the representative of the entire Black “race” on his shoulders no matter what he did, and he made sure that we his kids understood how our behavior would be judged by those same standards. He would often say to me when I did something wrong outside of our quarters, you can’t do that because you are my son and you represent me!

In the movie, Captain Davenport is a sophisticated, tough-as-nails, straight shooter with an impeccable sense of style and the self-assurance of a man who is keenly aware of his place in the world. Rollins’ character is so much like my father you would think the producers based Captain Davenport on him. Davenport’s mannerisms and the way he carries himself are mirror images of the amazing man I grew up with.

When the movie came out in 1984 [four years after my father retired] I got to watch it with him, and after it ended, I turned to him and said, now I understand why you are the man you are. He smiled and said, that Captain Davenport was really something else wasn’t he. My father was a man of few words, but those few were his stamp of approval for what he had just seen, and more importantly lived through during his 23 years in the Army.

My father is gone now and I’ve watched the movie at least half a dozen times since he passed away and each time I see it I get choked up, but no doubt in a good way.